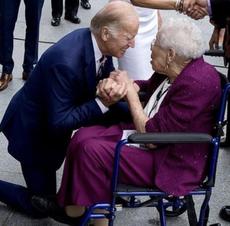 A STORY OF A MAN WITH CHARACTER!

This story comes from a Jewish friend. There is a moral in it for everyone of every/any/or no particular faith:
"The story I’m about to share with you about Joe Biden is special — in fact, I’m fairly certain I’m the only living person left who actually witnessed it firsthand.
It was about 16 years ago, and I was a young rabbi, brand-new to Delaware, on my way to lead a shiva minyan — a worship service following the death of a Jewish person. I was from California. Back then, I didn’t know Claymont, Delaware from Scranton, Pennsylvania.
A quick bit of background: When someone passes away in the Jewish faith, we observe seven days of mourning, called shiva. We gather a group of ten Jewish adults together — a minyan — to say the Mourners’ Kaddish.
It usually happens in a person’s home — somewhere intimate.
In this case, the deceased individual — her name was Mrs. Greenhouse, of blessed memory — had not been a person of means. She had lived in rent-controlled senior housing in a tall high-rise building off of Namaans Road. Her apartment had been too small to fit everyone into, so we conducted our worship service in the building’s communal laundry room, in the basement of the high-rise.
We assembled the ten elders together, and it was in this most humble of places that I began to lead the kaddish.
Toward the end of the service, a door at the back of the laundry room opened, and who walks in but Senator Joe Biden, his head lowered, all by himself.
I nearly dropped my prayer book in shock.
Senator Biden stood quietly in the back of the room for the duration of the service.
At the close of the kaddish, I walked over to him and asked the same question that must have been on everyone else’s mind: “Senator Biden — what are you doing here?”
And he said to me: “Listen, back in 1972, when I first ran for Senate, Mrs. Greenhouse gave $18 to my first campaign. Because that’s what she could afford. And every six years, when I’d run for reelection, she’d give another $18. She did it her whole life. I’m here to show my respect and gratitude.”
Now, the number 18 is significant in the Jewish faith — its numbers spell out the Hebrew word chai, as in “to life, to life, l’chayim!”
But it’s also a humble amount. Joe Biden knew that. And he respected that.
There were no news outlets at our service that day — no Jewish reporters or important dignitaries.
Just a few elderly mourners in a basement laundry room.
Joe Biden didn’t come to that service for political gain. He came to that service because he has character. He came to that service because he’s a mensch.
And if we need anything right now when it comes to the leadership of our country — we need a mensch.
I know this is such a simple, small story. But I tell it to as many people as will listen to me.
Because I think that, in their heart of hearts, when people are trying to think about the decision they’ll make this year — this is the kind of story that matters.
Joe Biden is a mensch. We need a mensch.
Thanks for reading.
— Rabbi Michael Beals of Delaware